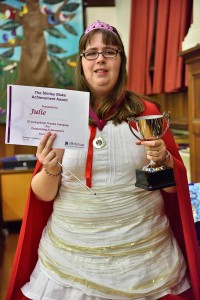 The worthy winner this time is Julie, (pictured receiving the award) who has been a member of LBTC for some years.  She was judged the winner because of her incredible dedication, her great support for others, and her ability to have the confidence to ‘carry the show’ by having a lead role, something unthinkable a few years’ ago.

The recognition is awarded to a member of the LBTC – an acting company for adults with learning disabilities – who has put the most effort into their role. Any member of the company can win this award as it is their contribution to the company that is recognised.

The award is named for Shirley Blake, who sadly passed away last year. Shirley was the mother of a member of Score and its LBTC. As part of her legacy, she donated to the Hereford services in order to provide greater opportunities for its members, including her son. The award is set to be given three times a year, at the beginning of each of the company’s terms. As well as the trophy, recipients of the award are also given a certificate and a medal to keep.

In the past, the Living Book Theatre Company have performed a variety of shows, such as ‘We’ll Meet Again’ – a short musical showing what life was like on the home front during the 1940s – and ‘The Complete History of England (Part One)’ – a light-hearted take on English history spanning the first two million year, which was funded by English Heritage.

Recently, the Living Book Theatre Company performed a pantomime for 218 children at St Thomas Cantilupe School, the school which hosts their rehearsals throughout the year. They also made a second performance for friends and family during which the award was given. The pantomime was titled “My Big Fat Ditzy Panto” and was a feminist take on classic fairy tales in which several princesses decide not to wait for a prince and started their own cleaning company instead. Score gets a makeover

Score Community Opportunities’ base in the centre of Hereford has had a summertime makeover, thanks to local manufacturer Helping Hand. Day to remember at Score

People supported by Score Community Opportunities in Herefordshire put on a show for families and friends on Friday 17 May. Affinity Trust has been shortlisted for six National Learning Disability and Autism Awards, one of the highest tallies of any organisation.